Here you can talk about Stratovarius and related bands. Language used is English.
Post Reply
525 posts

Ludwig Van Beethoven wrote: ↑
Sat Jan 16, 2021 12:41 pm
It's always someone else's fault: the interviews took place during a bad day and not because he is a failed musician and alcoholic who seeks scandal with questionable claims in order to get people talking; people are bad because they simply tell the truth about his failed projects which have been inconclusive for over 10 years; the money is not important but he still has to brag about the sales (obviously inflated and untrue) of his albums; he must announce non-existent large-caliber projects which, at the end of the day, will turn out to be the "usual soup" of recycled and stolen clichés and ideas.

What gets me is that he brags and thinks he is "famous." I mean, I guess there's a scale of fame. LOL!

Tier 1: Some asshole playing an acoustic guitar at a shithole bar
Tier 2: Recorded an album and got a couple thousand plays online
Tier 3: Had a successful band touring everywhere
Tier 4: Moving to Mexico to eat ramen noodles because he's so famous
Tier 5:

I know doc holiday on discord said it's mean for me to say it's pathetic to see Tolkki always making an asshole out of himself. Always trying over and over again, even at his age. (Not age hate, I mean... sometimes you need to know when to throw in the towel and say FUCK IT!)
These type of mentally ill people usually have caretakers and case workers who monitor them so they don't sperg out and cause a shitstorm all the time.

I think it would be more enjoyable to do solo work from home rather than always fucking up when it comes to trying to start huge projects, causing drama and everything else. Where do you think he's at now? Just playing random South American places for a while with guest bands? That's what he was doing mostly before. I don't know the end game. All the lies and bullshit and ripping people off with money and god knows what, there will come a time where he will hit a wall and realize he's fucked. But....it's not like he'd get put in jail in a comfy Finnish jail cell for long! He's famous after all!!! LOL!

More like: "Don't fuck with other's life believing you're untouchable 'cause 20 years ago you were famous since no one can".

We are just pointing out his lies and bullshit.

We are talking about some guy who wrote niche metal songs 20 years ago that got popular. Not some bill gates billionare changing the world.

He sees himself as an untouchable guru god. And that's where we say... BULLSHIT!!!

I want to add that I still love Tolkki's old songs but his music is something completely different from the person: I can enjoy even a song composed by a serial killer, this doesn't mean I love killers

I wouldn't obsess too much over the man.

It's like seeing a plane that ran out of fuel. Only the wings keep him afloat, but has been descending for about a decade now.
What the fuck did you just fucking say about me, you little bitch?!
Top 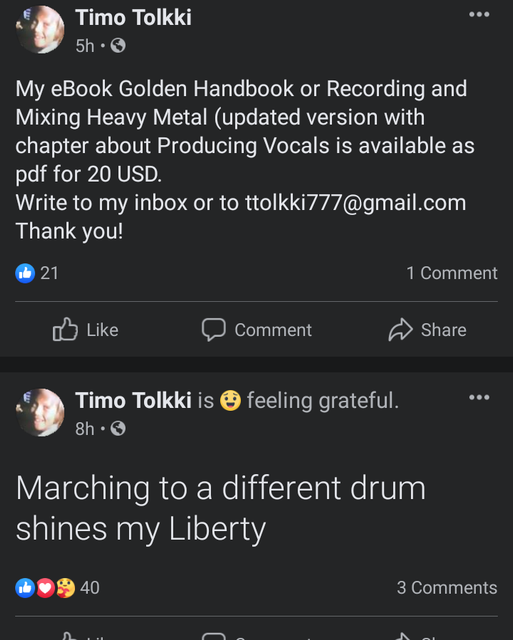 The lyrics are: "MErching to a different drum, shines my liberty"
Top 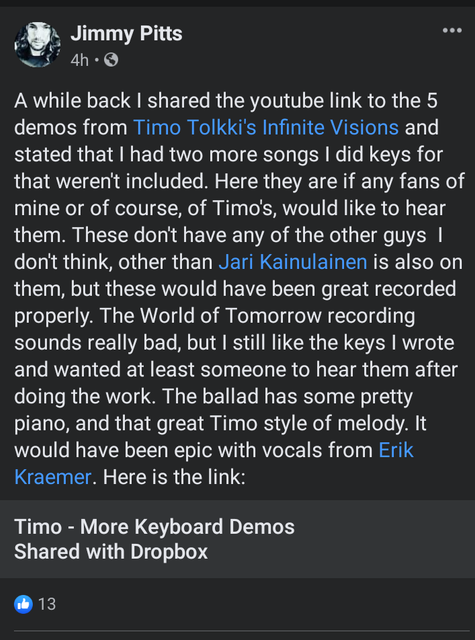 Proud owner of this Canon Powershot Camera. It has Full HD video too.
I will completely revamp my YouTube Channel. Sorry I have been very lazy regarding that.
I just chatted with Aquiles Priester and he will play drums on my forthcoming 4th Solo Album to be released in September.
We will record the drums in Aquiles Studio in Los Angeles in June.
Stay tuned for more info!

Any major or new update?

I am thinking he got zucccked because he posted those Lennon song lyrics.

One with the N word. Because that was the last post he had. (Well, one that was set to public.)
Top

You are right, dear Flavio. This is very nigga cube powermetal. I couldn't have said it better myself!
What the fuck did you just fucking say about me, you little bitch?!
Top
Post Reply
525 posts