Talk about everything else besides Stratovarius here in English. Please try to put more serious topics here, and silly topics in the Spam section.
Post Reply
124 posts 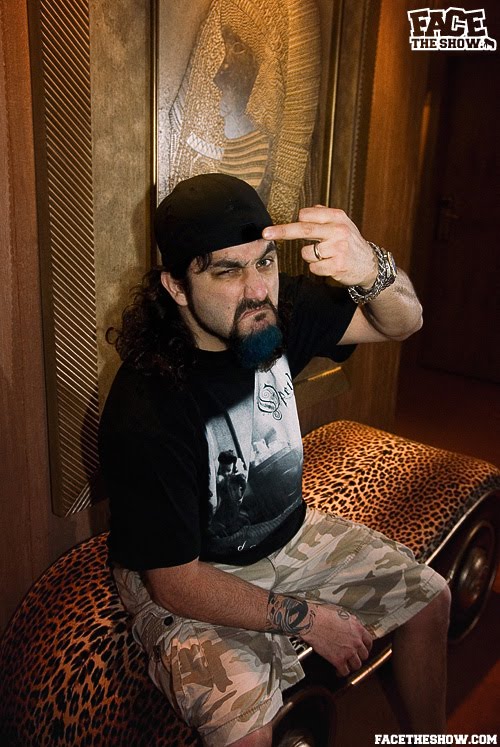 I am about to write something I never imagined I'd ever write:

After 25 years, I have decided to leave Dream Theater....the band I founded, led and truly loved for a quarter of a century. (BLA, BLA, BLA)

will be interesting to hear what dream theater comes up with next album. they better have it in 2011 if it was worth losing mp to them and not taking a few year break. this might just open them up some different song writing choices and perhaps utilize more of what the band has. seems mike made the choice that was right for him and i hope it leads to a lot of fresh stuff from him and dream theater in the future.
Top

:user: An obnoxious and overbearing former alcoholic leaving a band. Anyone else getting a "strange deja-vu"? :rotflmao1:


Anyway, this is surprising news ...

Dream Theater without Mike Portnoy. I wonder who his replacement could be. It probably wouldn't feel right! :nervous:

The black cloud's silver lining (ha-ha) is that we won't have to listen to his lackluster songs anymore. I really don't like the commercial direction he has driven Dream Theater towards in the last few years. The lyrical themes of vampires and alcohol abuse are also growing stale.

At least I saw him play with DT once

Well Jason Rullo returned to SX after he had the break he needed when the band had done an album without him.

Maybe they will get Mike back sooner or later.
Top

I will contribute more to the thread afterwards...
Top It's not the end of the world c'mon!

I think Portnoy were more into darker direction last times, so it isn't a big surprise, but after 25 years of being together it is a bad news. I don't if he is changeable to someone else...
And of course I hope they will reunite one day
Top

This is a fucking disaster. Portnoy was with Petrucci the most important member of this band while composing. He has composed wonderful songs.

Now it will never be the same again, that's for sure. And let's see how are they gonna find a drummer to replace MIKE PORTNOY.
Fuck this is insane. I'm angry. Shit, fucking shit.

This is the band's statement:


To all of our loyal fans and friends: It is with profound sadness -- regret -- we announce that Mike Portnoy, our lifelong drummer and friend, has decided to leave Dream Theater. Mike's stature in the band has meant the world to all of us professionally, musically, and personally over the years. There is no dispute: Mike has been a major force within this band.

While it is true that Mike is choosing to pursue other ventures and challenges, we can assure you that Dream Theater will continue to move forward with the same intensity -- and in the same musical tradition -- that you have all helped make so successful, and which is truly gratifying to us.

Fans and friends: File this episode under "Black Clouds and Silver Linings." As planned, we begin recording our newest album in January 2011, and we'll follow that with a full-on world tour. "The Spirit Carries On."

All of us in Dream Theater wholeheartedly wish Mike the best on his musical journey. We have had a long and meaningful career together. It is our true hope that he finds all he is looking for, and that he achieves the happiness he deserves. He will be missed.


I couldn't believe this topic till I entered MP's FB and website.

No... listening to The Shatered fortress (specially the end) seems now like if it was all the end. Fuck, listening to the whole Portnoy songs...and now he is gone. I'm at a loss for words here.

He finished the twelve step suite, a tribute to his dad, and now he says bye bye. Absolutely sad.
...Faster than light, higher than the sky, stronger than steel...We´re the legions of the Twilight...
Top

I take it as that you're a fan of his work?

Sigh..So am i, Dream Theater has been one of those bands where i've really paid attention to the drumming because it has been amazing..

And replacing Portnoy..That should be a fairly difficult task.
Top

Kosmo wrote:
And replacing Portnoy..That should be a fairly difficult task.

It's gonna be a challenge. I'd be really "scared" to be the drummer that has to learn DT's drum catalogue.
...Faster than light, higher than the sky, stronger than steel...We´re the legions of the Twilight...
Top

By the way..Is Portnoy joining Avenged Sevenfold as a fulltime member now?
Top

Yes, last his statement was that he will do all the duties of a drummer Avenged Sevenfold whn it doesn't collide with DT plans. Now it certainly won't collide.

Of course Portnoy is one and I think there isn't any drummer with such composing skills and I would say a spirit like him, but there are some good drumers (technically meaning) like Mastelotto or Maitland. But I don't really know what Petrucci and others will look for. For a good drummer who can play all DT stuff or a new spirit who will also compose, etc...

pneumonia wrote:Yes, last his statement was that he will do all the duties of a drummer Avenged Sevenfold whn it doesn't collide with DT plans. Now it certainly won't collide.

Of course Portnoy is one and I think there isn't any drummer with such composing skills and I would say a spirit like him, but there are some good drumers (technically meaning) like Mastelotto or Maitland. But I don't really know what Petrucci and others will look for. For a good drummer who can play all DT stuff or a new spirit who will also compose, etc...

Well I hope he doesn't.
Quitting DT for that kind of a group wold be insane.
Top

Yes, there are good drummers, but the problem here is that he was the drummer of the band, the composer of many songs (well, whe main composer is Petrucci, but then is Portnoy) and you know, it's gonna be absolutely strange to see another drummer in a DT show. I mean, Portnoy was powerful on stage and had a lot of presence and he was leading the band from the very beginning. It was not like a normal drummer. Who knows what's gonna happen.

And about A7X...the same question is flying in DT's community. That would be insane, but who knows.
...Faster than light, higher than the sky, stronger than steel...We´re the legions of the Twilight...
Top

Dream Theater's latest albums have sounded really, really stale and unspired to me, while AX7 has actually produced some really good stuff from what I've listened. I liked DT a lot more as a prog metal than portnoycore band, so maybe this is the best for everyone.
Top

Sure, it would be very difficult for DT to find a good person. Portnoy was also a great backing voice and as RazielSR he had a lot power on a stage (most in this quite flegmatic group). Petrucci now will have to be the leader or maybe LaBrie (but I don't know if he is seriously treated as a frontman by others, he doesn't contribute to composing).

But I think they must did something, because last 2 CDs was not so good and maybe they will do better now (the same was with Tarja, Kiske or Tolkki). I hope both Portnoy and DT will now success with new releases, etc
Top

But, let's see. The problem with MP in the last albums was that he was more into "heavy" than into "prog". For example, these are the songs composed by MP:

Seeing his compositions, there's diversity there, but in the last albums he was more for songs like Constant Motion, etc, etc and his growl in backing vocals. and that was something that DT fans didn't like.

I'm not that scared for the composition, mainly cause the best songs for me always came from JP by far, but the problem here is not just the songs he composed, because surely we'll have more prog now and less heavy. But cmon, this man was the mainman in tours and the leader of the band. That's gonna be strange now. And then you have the drumming, this is gonna be impossible to replace.

And well, because of that dedication, I suppose he got tired and was not having fun while playing with the guys never more.
...Faster than light, higher than the sky, stronger than steel...We´re the legions of the Twilight...
Top

I found a time to post my deepful "regrets" on MP leaving DT. Seriously, I think I haven't felt this bad since Strato's statement (that turned out to be a lie after a few weeks). He was one (if not the main) of the drummers that inspired me to start playing it, and reading that he's leaving also from the band that almost introduced me to this wave of prog/power/etc music...I mean, it just feel strange.
He might have his reasons and in another way I think he's kind of right, but I think I just need a few days to assimilate this...I feel awful, the only miracle I'm waiting for is that he returns, but that seems pretty unlikely now

It's too bad a great band is losing a great drummer

Songs or only lyrics? In my booklets they have always composed music together (or without LaBrie) except some songs.

Surely he was more into heavy music last time. AX7 is maybe good for him now. They're pleasant to hear, but their so childish (look at their website, videoclips), insane. I don't understand how could he change really serious musicians to a metalcore band.

I really look forward now for the next drummer and next DT CD.

MP says in his statement that his father invented "Dream Theater" as a name for a band, but business must go on without him now.
Top

Well, I see that in my booklets too, because everybody used to be involved in the songs, but the songs I mention were MP's idea lyrically and musically. That doesn't mean that Petrucci was composing too, but that songs came from MP for sure. And the last "radio friendly" always came from JP (Forsaken, Wither, etc)
...Faster than light, higher than the sky, stronger than steel...We´re the legions of the Twilight...
Top

What it's clear is that if in the next and first album without MP, they don't have success, they'll be doomed. Shit.
...Faster than light, higher than the sky, stronger than steel...We´re the legions of the Twilight...
Top

And their getting better, that's silly

I love I Walk Beside You!!! Beautiful song!
Top

I like the intro and pre-chorus, but the chorus is so pop (not even rock), i just can't stand it. I must skip the song (the rest on Octavarium is great even those more Muse-like songs like Never Enough).
Top

pneumonia wrote:I like the intro and pre-chorus, but the chorus is so pop (not even rock), i just can't stand it. I must skip the song (the rest on Octavarium is great even those more Muse-like songs like Never Enough).

I love the chorus too! I love the whole song. It's a nice chance to take a breath between all the prog stuff.

RazielSR wrote:What it's clear is that if in the next and first album without MP, they don't have success, they'll be doomed. Shit.

...Besides, the one who'll come to replace Mike would have a lot of pressure for sure
|StratoFan Forever|
Top

maybe this will be the spark that inspires some new creativity? But I doubt it, if anything, I see the next album taking generic to the new level. Hold out hope though.
Top
Post Reply
124 posts